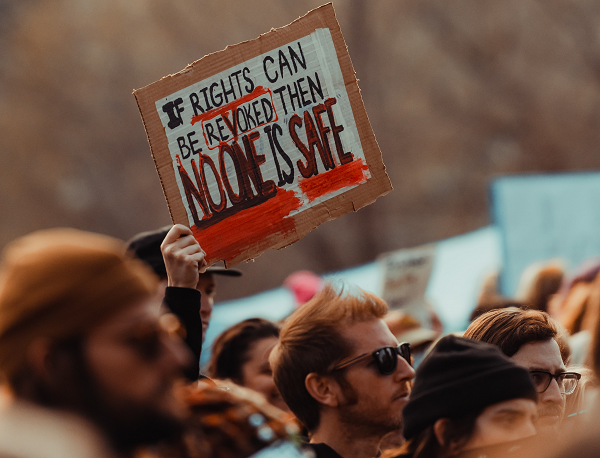 [vc_row][vc_column][vc_column_text]Many legal and political analysts are cautioning that the leaked opinion of Associate Justice Samuel Alito on Mississippi’s 15-week abortion ban could jeopardize other to privacy rights that have been protected by Court decisions if that draft wording from February becomes final.

Although the U.S. Supreme Court is not expected to rule on Dobbs v Jackson Women’s Health Organization until June, Alito’s leaked draft opinion is reverberating throughout the country. As written, it would put an end to Roe v Wade, the landmark decision that guaranteed Constitutional abortion rights protections to American women for nearly the past half century.

“This is about a lot more than abortion,” President Biden said last Wednesday. “What are the next things that are going to be attacked?”

Associate Justice Harry Blackmun authored the opinion on Roe in 1973. In it, he said, “This right of privacy, whether it be founded in the Fourteenth Amendment’s concept of personal liberty and restrictions upon state action, as we feel it is, or, as the District Court determined, in the Ninth Amendment’s reservation of rights to the peo­ple, is broad enough to encompass a woman’s decision whether or not to terminate her pregnancy.”

In his draft opinion in February, Alito asserted that the Roe decision “stood on exceptionally weak grounds. Roe found that the Constitution implicitly conferred a right to obtain an abortion, but it failed to ground its decision in text, history, or precedent.”

“If the right to privacy is weakened,” Vice President Harris said in a statement on Thursday, “every person could face a future in which the government can potentially interfere in the personal decisions you make about your life.”

Alito did “emphasize” in his draft, “Nothing in this opinion should be understood to cast doubt on precedents that do not concern abortion.”

However, other legal watchers aren’t so quick to go along. “What’s so interesting about this is,” Attorney Rachel Self tells Political IQ, “all of these recent SCOTUS nominees in their confirmation hearings, and in their interviews with Senators they were asked what they thought about Roe, and they all said it was settled law. Then they had a chance to overturn it and it suddenly isn’t settled law. So I don’t know that Griswold or Obergefell would be any different. “

Self says if there isn’t any federal legislation enacted by Congress or the President protecting certain rights, “other dominoes may fall.”

“If Roe v Wade is to fall, then Griswold v Connecticut, presumably, is to fall as well, because the word ‘contraception’ or ‘birth control’ doesn’t appear in the Constitution,” said Rep. Jamie Raskin (D-MD), a Constitutional scholar, last Monday.

In 1965, the Court ruled in Griswold that the Constitution protected the right of marital privacy against the state imposing restrictions on contraception.

Mississippi Governor Tate Reeves (R) said this weekend that he’s not considering outlawing birth control “at this time.” However, he also said he’s not ruling out criminalizing IUDs.

“Now the question is,” says Attorney Robert Schalk, “are you going to let states interpret that [Alito] decision as, ‘We can ban anything we want that we determine an abortion’? And if IUDs and morning after pills are in that category pursuant to that state’s legislature, you can see them try. Then they’ll say, ‘Well, tell me I’m wrong’ at the Supreme Court level or at the higher court level for sure.”

Will Same-Sex Marriage Be Challenged?

“Liberties such as same-sex marriage could come under fire in certain states,” notes Schalk. “We just don’t know how [the Supreme Court’s June ruling] is going to be construed by each state, various district courts all the way down to the state level.”

Meanwhile, Alito’s leaked draft opinion on abortion parallels his dissent in Obergefell v Hodges, the case that recognized the right of same-sex couples to marry, “where he argued that gay marriage failed the Glucksberg test,” according to Self.

Washington v Glucksberg was a landmark 1997 case in which the Court unanimously held that assisted suicide was not protected by the 14th Amendment right to due process.

Alito’s 2015 dissent in Obergefell complains that “those who cling to old beliefs” will be forced to “whisper their thoughts in the recesses of their homes,” lest they be subject to “turn-about” persecution by gays and lesbians and their sympathizers.

“The only question is whether he has the votes” from other Justices to strike down same-sex marriage, says Self.

What About Civil Rights?

According to Pew Research, one in five newlyweds in 2019 married someone of a different race or ethnicity.

“[Alito] does open up in this question about the due process clause that there are these previously given rights that are not deeply rooted or long held, like interracial marriage,” Yvette Simpson, attorney and CEO of Democracy for America, said Sunday on ABC.

“I even saw some idiocy over the weekend where folks were arguing that they should next go after Brown versus The Board of Education,” Chicago Mayor Lori Lightfoot (D) said on MSNBC Monday, referring to the landmark 1954 decision that struck down school segregation.

Could states re-segregate or enact other racially discriminate laws, like re-criminalizing interracial marriage?

No, says Self, because of the protections federally codified by the 1964 Civil Rights Act.

“Brown v Board of Ed and all the other civil rights would be very hard to go after because the Civil Rights Act is in place,” she says. That’s what separates them from many of the other rights now being questioned. “Other than the Supreme Court, we don’t have any Acts in place protecting gay marriage or protecting abortion.”