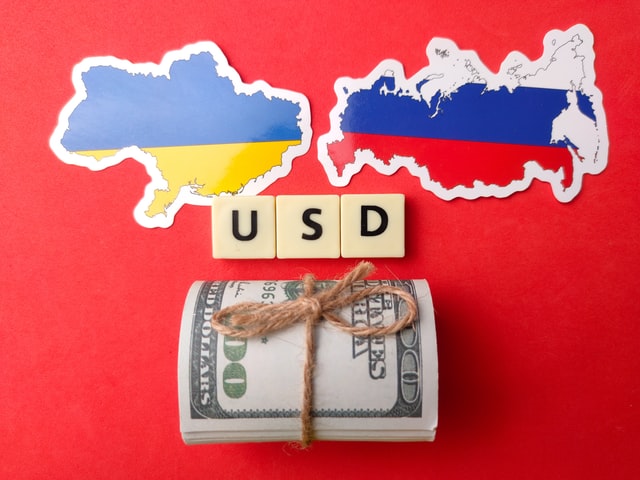 [vc_row][vc_column][vc_column_text]The scope of global economic sanctions levied against Moscow beginning just days before it waged its unprovoked aggression against Ukraine have been unprecedented.  But what has been their impact so far, as Russia and Ukraine head into their fourth month of warfare?

“Clearly Russia is going into a deep recession,” Arik Burakovsky, Assistant Director of the Russia and Eurasia Program at The Fletcher School of Law and Diplomacy at Tufts University, tells Political IQ. “This will likely be greater than what we saw in 2008 with the global economic crisis. Some economists have predicted that Russia’s GDP will shrink by 10-15% this year. Others have more conservative estimates, like 8%.”

All told, some two million Russians will lose their jobs this year, including 200,000 in Moscow, as foreign companies like Maersk, UPS, DHL divest from the country. This week, McDonald’s—whose entry into Moscow just as the Soviet Union dissolved was hailed as a benchmark of emerging capitalism there—sold off its Russian assets to a Siberian licensee.

Meanwhile, Russia is losing its skilled workforce, with about 10% of its trained techs, a total of 170,000, projected to exit the country by the end of May.

“We’ve seen an exodus of talent, many of their people who really are the future of the Russian economy,” says Nicolas Veron, Senior Fellow at the Peterson Institute for International Economics. “It’s very destructive.”

Altogether, an estimated 300,000 Russians have emigrated since the war began—which might lead to an opportunity for new sanctions.

“One thing that’s been proposed is to expand the sanctions onto wealthy Russians, beyond just the oligarchs, unless they come out and condemn the war,” says Burakovsky. “It’s not entirely clear what this would achieve because the Kremlin has the political repression tools and censorship at its disposal, but so many Russians right now are abroad.”

Russian censorship makes it difficult to quantify exactly how the sanctions are impacting Russia’s military efforts. “We’re missing the economic data in terms of imports/exports and cross-border capital flows,” says Burakovsky. “And it’s not entirely clear if they have the technology to build new weapons.”

But, he adds, there are clues. “We’ve seen Russian tanks with computer chips that are meant for washing machines.”

In fact, Commerce Secretary Gina Raimondo testified before the Senate Appropriations Committee last week about this. “We have reports from Ukrainians that when they find Russian military equipment on the ground, it’s filled with semiconductors that they took out of dishwashers and refrigerators,” she said. “Our approach was to deny Russia technology—technology that would cripple their ability to continue a military operation. And that is exactly what we are doing.”

The Biden Administration is looking into new plans to choke off Russian energy revenues, estimated to amount to about $20 billion a month.

Meanwhile, efforts by the European Union to terminate all 27 of its member nations’ addiction to Russian oil have hit a roadblock. It was proposed on May 4th but is being held up by three members, all of which are also members of NATO: Hungary, the Czech Republic and Slovakia.

“Those three countries are highly dependent on Russian oil imports, and so I think it’s unlikely the EU will be able to pass an oil embargo on Russia,” says Burakovsky.

Veron is not so pessimistic. He believes Hungary, which gets more than 60% of its oil and 85% of its natural gas from Russia, is holding out for concessions, like help building refineries and help substituting Russian oil with other support. “I think it’s just a delay that’s going to happen,” he says.

Should the EU oil embargo fail, says Burakovsky, “What could be done, alternatively, is to create a global price cap on Russian oil.”

“You start with the United States and some of our allies in East Asia like Japan and South Korea, major buyers of Russian oil, and then bring along China, India, Turkey. Of course, for them it’s also beneficial to buy Russian oil at a discount.”

He believes trying to lower the price of Russian oil might even be more effective “because if you stop buying Russian oil altogether, oil prices globally go up. And this has economic consequences for the whole world in terms of gasoline prices, but it also means that Russia can sell oil at higher prices. So even though it’s selling fewer barrels, it’s getting more bang for its buck.”

Even if the oil stopped flowing to the EU, Europe would still be dependent on Russian natural gas. Taxes from both oil and gas make up roughly 40% of Russia’s government revenue. Moscow takes in roughly $700 million a day from crude oil and petroleum export income. Gas sold to Europe generates another $400 million.

By contrast, if the EU—along with Britain and the U.S.—were to ban Russian oil and gas, its economy could contract more than 20% this year, as opposed to current projections of up to 15%, according to the Institute of International Finance.

“It’s an easy thing to observe from the U.S. because the U.S. has essentially energy independence with gas,” notes Veron. European homes, he says, are “critically dependent” on Russian gas. “You’re not going to have people freezing next Winter just because we want to cut the external revenue of Russia. It has to be done in a way that doesn’t create a path of destruction in European domestic life.”

Can—and should—more be done to sanction Russia? “A lot has already been done. It’s just that it’s going to take time to enforce in terms of export controls, banking sanctions, all kinds of obstacles to businesses,” says Veron. “Remember that Russia has prepared for years for this situation.”

How long will the sanctions take? “It really depends on your time horizon,” he says. “For example, if Europe stops buying Russian oil, it will happen gradually over a number of months. And for gas, we’re probably talking about a couple of years.

“And of course, we also don’t know the time horizon of the war itself. Will it be over in a few months, or will it take years? Will it escalate, will it not escalate? So there are basically only question marks here.”