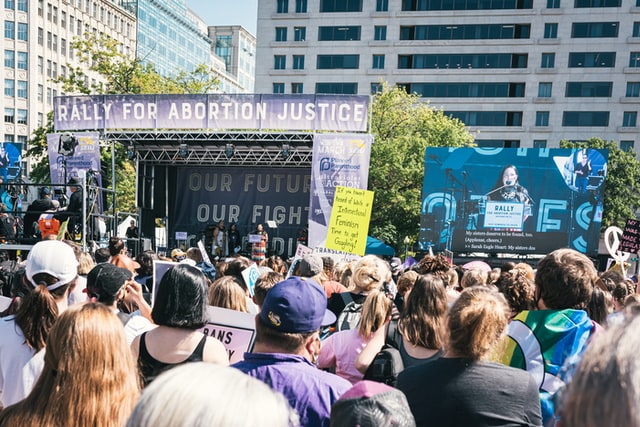 [vc_row][vc_column][vc_column_text]The U.S. Supreme Court wrapped up its most recent term on Thursday with six of the 15 major cases it took up decided by the 6-3 conservative majority. This has Court watchers noting that its so-called “super majority,” which includes five Justices who were nominated by two Presidents who lost the popular vote, are now remaking jurisprudence along a number of ideological fronts—even if it defies the public will—and asking whether the Court will only become more emboldened, or whether there are avenues for change.

While the 6-3 rulings this term have included hot-button issues such as gun control and the separation of church and state, no case has gripped the public as fiercely as Dobbs v Jackson Women’s Health Organization, in which the Court ruled on a Mississippi law and overturned the Constitutional right to abortion established back in 1973 by Roe v Wade.

A May Quinnipiac poll found that 64% of voters agreed with the 1973 Roe decision. And that number has not ever fallen below 60% since Quinnipiac started polling on this topic in 2005.

After analyzing numerous public opinion polls showing similar support for keeping Roe in place, CNN Data Analyst Harry Enten concluded, “One could argue that what the Supreme Court has done in overturning Roe is unprecedented from a public opinion point of view.”

He’s not alone. In an essay entitled, “A Branch of Government Self-Destructs,” author and veteran journalist James Fallows refers to several past Court rulings, including Brown v Board of Education and Roe v Wade, and says, “The Supreme Court is not supposed to follow the opinion polls. But what the previous Courts did in these and other cases happened to be aligned with what a majority, in a democracy, wanted done. Over the long term, its general actions matched the general will of the public.”

He further writes that the conservative imbalance in the Court is part of a larger strain on our “democratic legitimacy,” which includes the Senate abuse of the filibuster, and the “sudden relevance” of the Electoral College over the popular vote in Presidential elections, concluding, “We’re now closer to systematic rule by a minority, rather than respect for its rights. A democracy cannot forever function this way.”

Conservative Justices Emboldened by Their Numbers

Analysts, liberal and conservative, are pointing to a Court majority emboldened by its numbers.

Back in May, when Justice Alito’s draft opinion hinted that the overturning of Roe was likely, conservative commentator Edward Whelan, Senior Fellow at the Ethics and Public Center, said, “The existence of a more reliable conservative majority makes it much more attractive for conservative Justices to provide the four votes needed to grant review.” While liberal New York University Law Professor Melissa Murray said at the time, “This is a Court doing everything they can whenever they can.”

Indeed, also back in May Justice Thomas said government institutions shouldn’t be “bullied” into delivering a publicly preferred outcome—echoing a speech he’d made in the Fall, when he’d said, “I think we should be careful destroying our institutions because they don’t give us what we want when we want.”

“Thomas Drags the Court in His Direction”

Meanwhile, there’s been much made of the fact that Justice Thomas wrote a separate opinion to Dobbs adjacent to the majority opinion, in which he stated, “[I]n future cases, we should reconsider all of this Court’s substantive due process precedents, including Griswold, Lawrence, and Obergefell,” referring to those that guaranteed the rights to contraception, same-sex relationships, and same-sex marriage.

Many legal analysts, like CBS News Chief Legal Correspondent Jan Crawford, hasten to point out that the majority opinion in Dobbs counters Thomas. “Abortion is different because, as the Court said, it involves a life. You had Justice Kavanaugh writing a separate opinion making that point, emphasizing that point. Those cases are not at risk.”

However, back in 2019 Thomas biographer Ralph Rossum asserted, “Thomas drags the Court in his direction. They may not go as far as he goes, but they go further than they would have otherwise.” And he listed some areas of the law where Thomas has pulled the Court closer to his positions, including voting rights, campaign finance and the Second Amendment.

Has the Chief Justice Lost Control?

In fact, some critics are now calling it “The Thomas/Alito court” asserting that Chief Justice Roberts has “lost control.”

“This is a Court that is fighting with each other past the Chief,” said University of Texas Law Professor Stephen Vladeck. “The bitterness, the intensity, the hostility is a reflection of the Chief’s powerlessness because he can’t control either block.”

Others take a different view. Following the leak of Alito’s draft opinion, Attorney Robert Schalk  told Political IQ, “I don’t think we want to say he lost control because in my opinion it’s not his Court to control. There are nine Justices who are independent thinkers, independent analyzers of the case before them, the law before them and their interpretation of it.”

In response to Dobbs, there are calls to water down the “super majority” by expanding the Court.

“This Court has lost legitimacy,” said Sen. Elizabeth Warren (D-MA) on Sunday. “I believe we need to get some confidence back in our Court, and that means we need more Justices on the United States Supreme Court.”

The Constitution Project at Project on Government Oversight (POGO), a bipartisan think tank, does not believe the Court should be simply expanded, but that there are other reforms worth exploring. Policy Analyst David Janovsky gave this statement to Political IQ, “The Supreme Court’s decision in Dobbs illustrates how the court vests too much power in too few people, for too long. Five justices have the power to take away rights, while simultaneously limiting people’s ability to participate in the democratic process. It is past time for long-term reforms that dilute the justices’ power, such as term limits and restructuring the court’s decision-making processes.”

In states and municipalities, some criminal justice systems are taking Dobbs-triggered laws into their own hands.

In Louisiana, Utah and Texas this week, judges have applied temporary bans on their states’ abortion restrictions.

In all three cases, the orders only last a couple of weeks. In the Louisiana and Texas cases, the judges asserted that the laws were inconsistent with their states’ due process protections.

In Utah, the judge ruled that a temporary restraining order against the law should remain in place while a lawsuit brought by Planned Parenthood went forward.

Meanwhile, some 100 prosecutors across the country have signed on to a statement pledging to “refrain from prosecuting those who seek, provide, or support abortions” in the aftermath of the Dobbs ruling.

Jason Rogers Williams, the District Attorney who serves New Orleans, said Monday that there’s “very little infrastructure” to enforce these abortion laws on top of other crimes already weighing down law enforcement. “DAs have broad discretion about what charges they bring and what charges they don’t bring,” he added.  “This office will not shift its priorities in order to prosecute mothers who seek abortions or doctors who perform those.”

Next Term Could Further Conservatives’ Power

Ketanji Brown Jackson was sworn in Thursday as the first Black woman Justice on the Supreme Court. While her addition is historic, it will not change the Court’s ideological make-up because she’s a liberal replacing a fellow liberal, Stephen Breyer.

Justice Jackson’s first term, beginning in October, is sure to test the Conservative majority’s power with at least three cases of significant social impact: affirmative action in college admissions, whether religious freedom should allow business owners the right to refuse to serve same-sex weddings, and how much protection federal law can provide to minority voters when states redraw electoral boundaries.