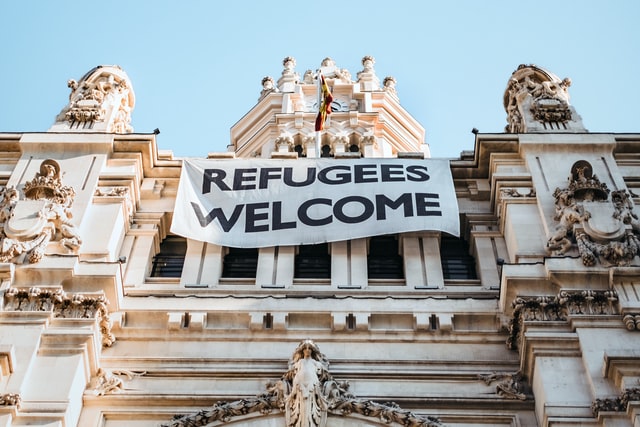 [vc_row][vc_column][vc_column_text]Since Russia invaded back in February, more than 8 million Ukrainians have fled their homeland in Europe’s largest refugee crisis this century. However, just over 100 days into a war that’s predicted to last years, more than 2 million Ukrainian refugees have returned home.

It’s happening even as Russia continues to bombard the vast swath of the country with random missile and rocket attacks, and as other nations—including the U.S.—are welcoming the Ukrainians with open arms.

“Act of Defiance” Against Russia to Return

There are war-related reasons why some Ukrainians are returning, according to Rebecca Grant, National Security Analyst with IRIS Independent Research, “They need their people to keep that railway running to swap out the medical teams you read about that are staying in the front. And to be what they want to be, which is a free country on their own,” she tells Political IQ. “It’s an act of defiance to go back.”

According to Naomi Steinberg, VP of Policy and Advocacy for HIAS, founded as the Hebrew Immigrant Aid Society, other reasons are widely varied. Some Ukrainians, she says, simply want to reunite with families, “whether it is with the men in their lives, the fathers, uncles, brothers, best friends who stayed behind to fight, or to reunite with elderly family members or those who are disabled and unable to leave.” Others are returning because they couldn’t find work or sustainable housing in their sponsor countries.

“It doesn’t necessarily mean that once they return to Ukraine they’re staying. They might go back and do what they need to do and then leave again,” adds Steinberg.

In fact, the daily number of crossings in each direction is converging. Since the start of May, the coming and going counts have been particularly close. On June 13th 45,000 crossings out of the country were recorded, with 33,000 coming back in. According to the aid organization, the International Rescue Committee, some of these crossings were just quick trips to evaluate conditions, check on family members or help others to leave.

It’s feared that dozens may have been killed following a Russian rocket attack Monday at a shopping mall in the central Ukrainian city of Kremenchuk. More than 1,000 Ukrainians were inside at the time.

As rescue and recovery workers picked through the rubble looking for casualties, Ukrainian President Volodymyr Zelensky called the attack a “calculated Russian strike” by the “largest terrorist organization in the world.”

“We’ve seen sporadically, ever since Putin lost the battle for Kyiv and had to shift his focus just to Eastern and Southern Ukraine, that they’ve occasionally launched missiles at a distance, basically to terrorize people,” U.S. Secretary of State Antony Blinken noted Sunday.

“No part of Ukraine is free from a Russian air or missile attack, but there are large parts of Ukraine that are not under daily attack,” says Grant.

“Of course, people understand the risks, but that also tells you the real drive for many people to get back home,” adds Steinberg.

The country that has taken in the lion’s share of Ukrainian refugees is Poland, which has already accepted nearly 4.4 million of its neighbors.

“It’s working, but there are logistical logjams coming down the pike,” Mark Brzezinski, U.S. Ambassador to Poland, cautioned last week. “The four largest cities in Poland, Warsaw, Poznan, Wroclaw, and Krakow, are now at capacity. And as the government tries to direct some of the newly arriving refugees to the countryside, the refugees don’t want to go to the countryside. They want to go to the cities.”

Even so, Brzezinski points to a Pew Public Opinion Poll showing that Polish support for taking in even more refugees is increasing rather than decreasing and is now at 80%.

New data from the Department of Homeland Security shows that some 71,000 Ukrainians have arrived in the U.S. since President Biden announced in March that the White House would welcome up to 100,000 fleeing the Russian assault.

However, while the Administration launched a new web portal to allow Americans to sponsor Ukrainian arrivals, many are still arriving in a variety of ways.

Steinberg notes that many were already in country when the war broke out and are now going through the process of Temporary Protective Status, or TPS, which allows an asylum seeker to stay in the U.S. for up to 18 months.

“And we know, as the war was really unfolding many Ukrainians, in the thousands, made their way to Mexico and then to the U.S.-Mexico border in order to try to enter that way and seek asylum,” she says, adding that the White House is now trying to shift Ukrainians away from that route toward its United for Ukraine program—which her organization, HIAS, has “significant concerns” about.

“You know, you can’t simply announce one program and have that supplant or preclude people’s rights to seek asylum. It shouldn’t work that way.”

That said, she believes the United for Ukraine program is “moving at quite an impressive pace.” As of June 24th, 63,554 applications had been submitted, of which 39,026 had been approved for travel and 15,821 have already been paroled into the United States. “So that tells you, this really is moving very quickly,” says Steinberg.

If you’d like help refugees—from Ukraine or elsewhere in the world— send donations to HIAS: